Skip to main content
You are the owner of this article.
Edit Article Add New Article
You have permission to edit this article.
Edit
Home
News
Sports
Opinion
Features
Community
Multimedia
Find a Job
e-Edition
Obituaries
Place ad
Help
1 of 8 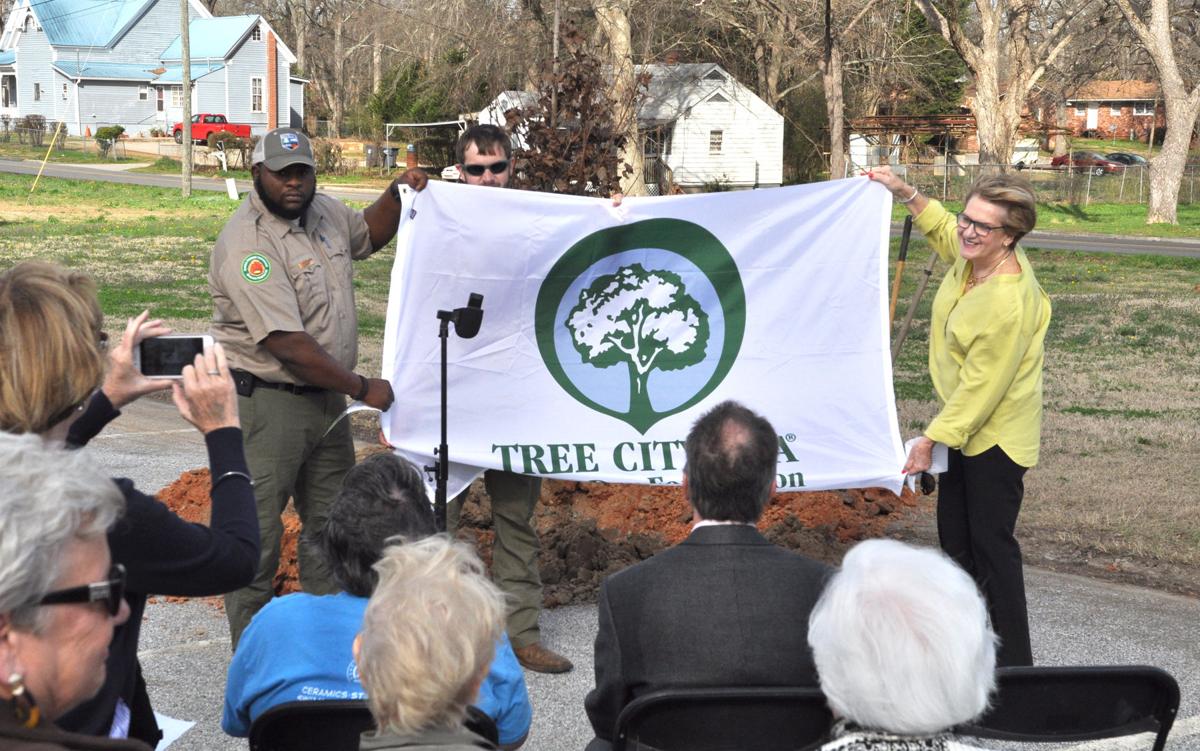 Members of the family of former Flovilla Mayor George Smith gather Friday during the city’s Arbor Day ceremony. During the event, a tree was planted in Smith’s memory. (Staff Photo: Michael Davis) 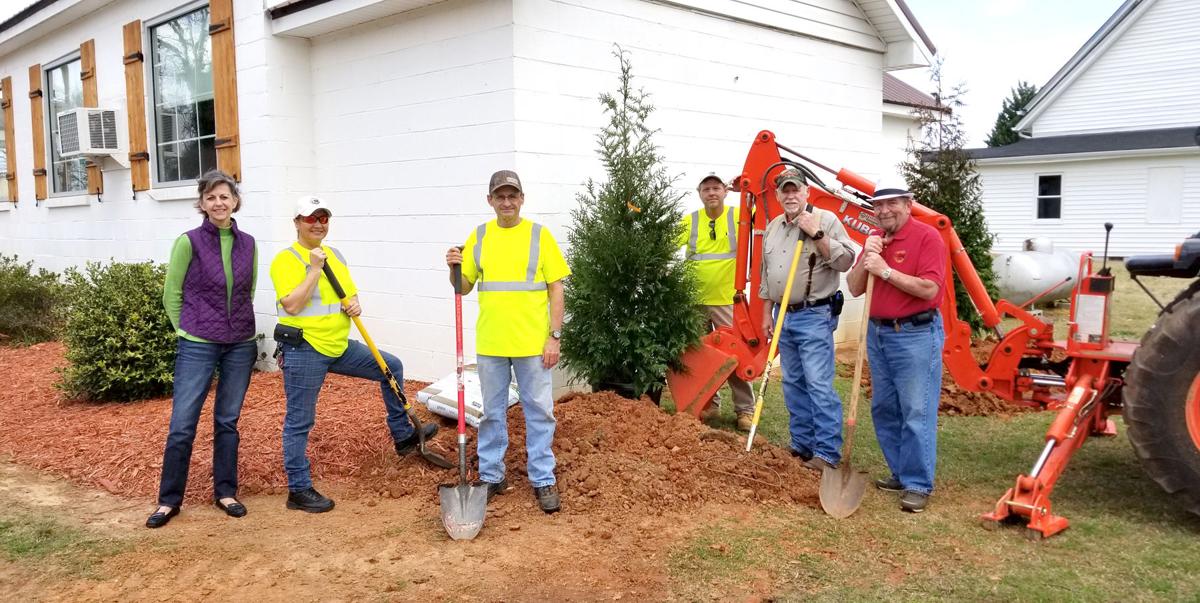 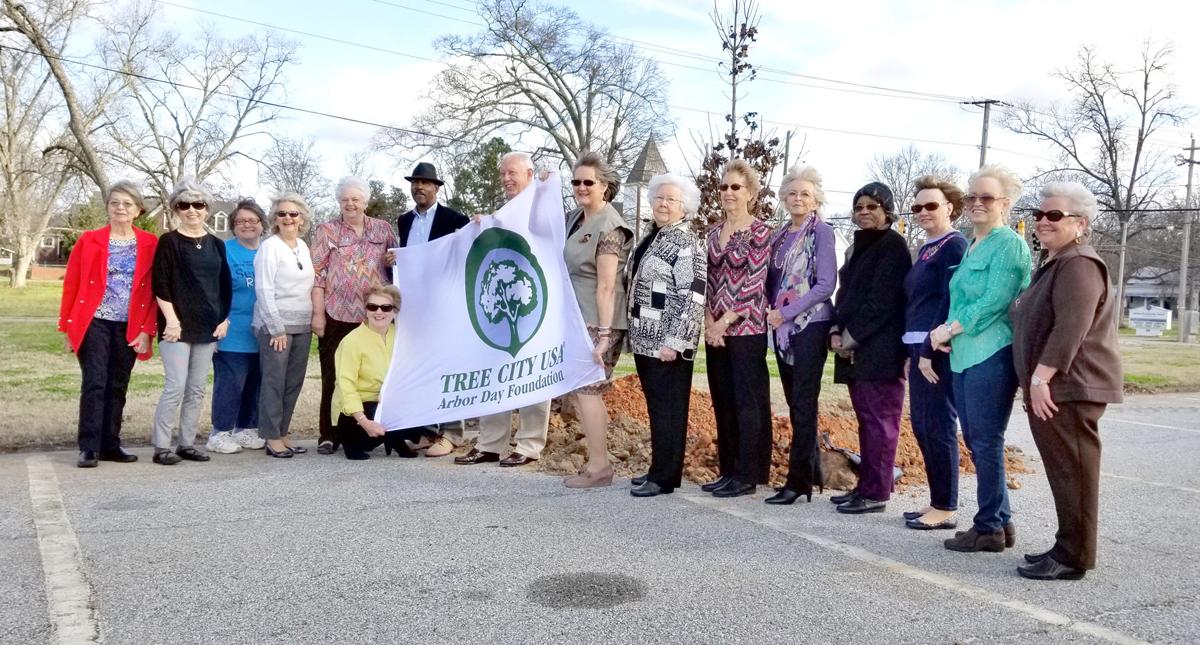 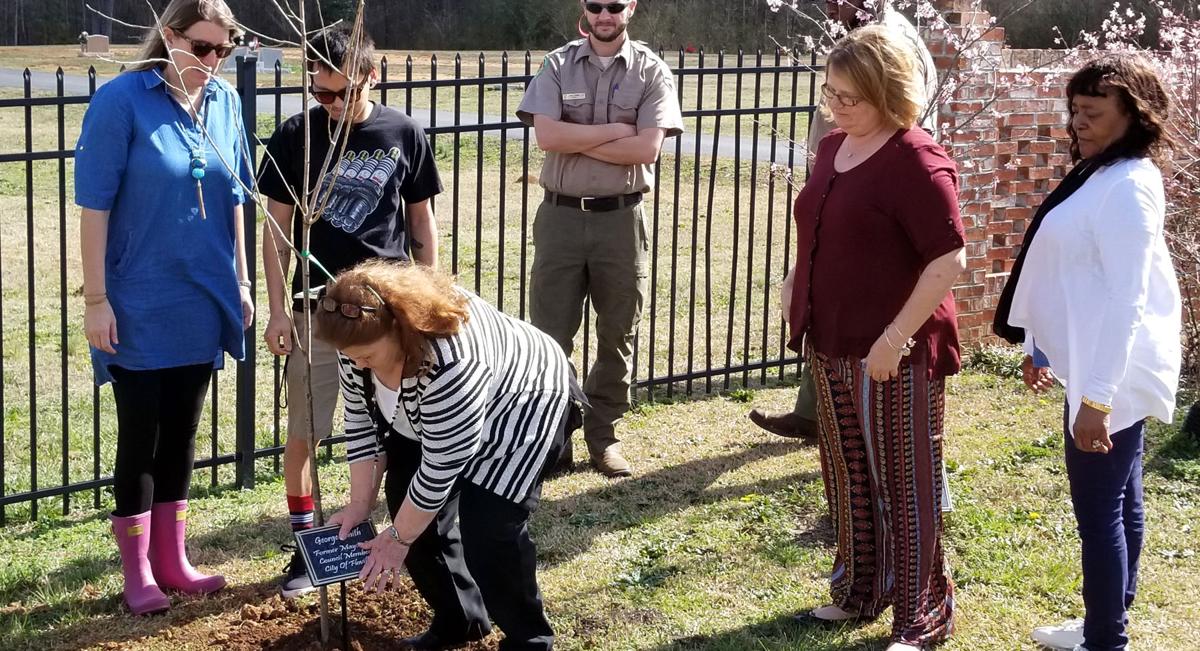 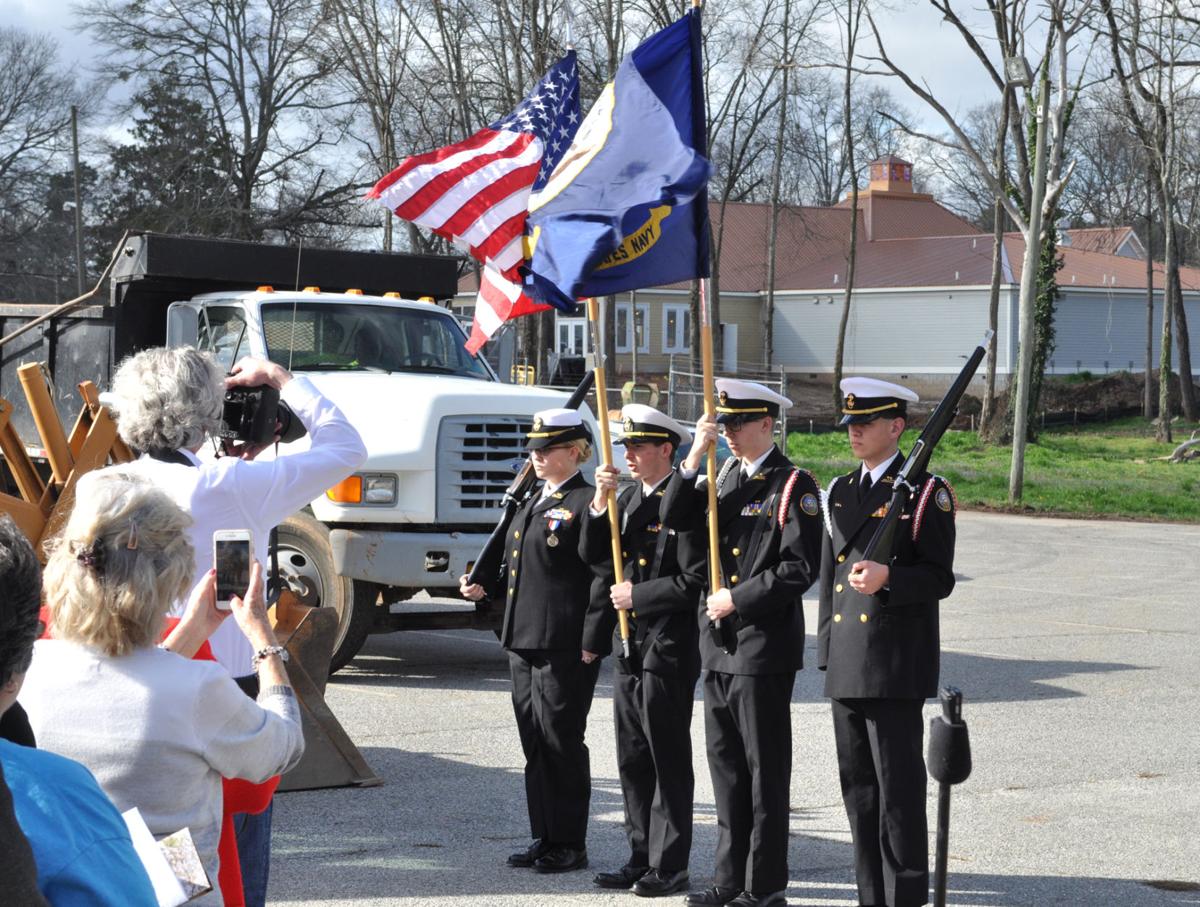 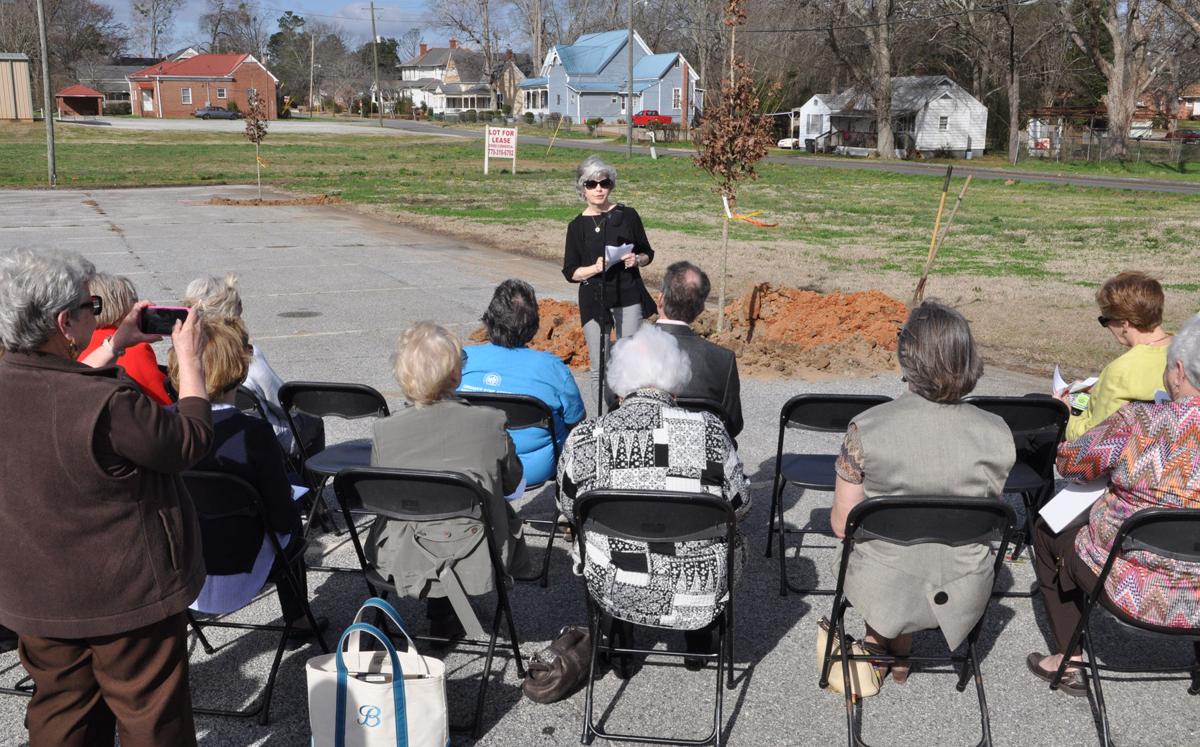 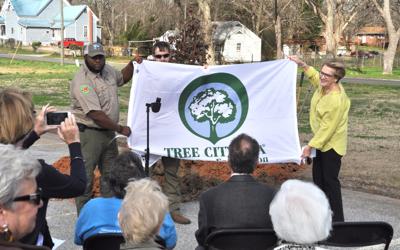 Members of the family of former Flovilla Mayor George Smith gather Friday during the city’s Arbor Day ceremony. During the event, a tree was planted in Smith’s memory. (Staff Photo: Michael Davis)

The city of Jackson’s ceremony included the installation of three sugar maple trees in a city parking lot at North Oak and First streets.

The city also received its official package from the Georgia Forestry Commission, commemorating its 26th year as an Arbor Day Foundation Tree City USA city, with a flag and other items.

Jackson Mayor Kay Pippin also recognized the city’s Tree Board and presented a proclamation to the city’s Azalea, Cherokee and Mimosa garden clubs.

She said engaged city residents, like those in the garden clubs and those present at Friday’s ceremony, help make the city cleaner and safer.

“All the bad things that have happened have happened to good cities and it can happen to us, but it hasn’t yet and it’s because of the foundation that folks like you lay. Planting trees, picking up trash, getting rid of blight — it’s all a part of preventing crime,” Pippin said.

The city of Flovilla on Friday honored the late George Smith, a former council member and mayor.

After a ceremony at Flovilla City Hall led by Flovilla Tree Board Chairwoman Letha Kinard, in which the city was also presented with its Tree City USA package, those in attendance adjourned to the front gates of a city cemetery to take part in a planting ceremony. This is the city’s 27th year as a Tree City.

Smith and his family moved to Flovilla in 1980, and he was elected to the council in 1985. He served as mayor from 1986 to 1991 and is credited with upgrading the city’s water system and working to get the city’s fire insurance rating reduced, saving homeowners money on their property insurance.

Flovilla’s annual Arbor Day ceremony typically honors a living former city official, and after last year’s event, city leaders discussed honoring Smith in 2018. Though he passed away before the ceremony could be held, officials decided to go ahead and hold it in his memory, with many members of his family in attendance.

Flovilla Mayor Beth Burns Ogletree, who grew up with Smith’s children, said his work has been an inspiration to her.

“Mr. George planted the seeds around 30 years ago, and they continued to grow into majestic trees,” Ogletree said. “I had no idea then that I wanted to be mayor. … I appreciate the work he did to lay out that model for me. I wish he were here today with us.”

The city of Jenkinsburg also on Friday held a tree-planting ceremony, placing several Thuja Green Giants outside the city’s clubhouse.

While landscaping plans haven’t yet been finalized, city officials plan to install the trees once their exact placement is determined.

History of the Federal Work-Study program

The Federal Work-Study (FWS) program has played a significant role in increasing access to higher education since it was formed in 1964. To explore how the program has kept up with inflation, tuition, and cost of living, StudySoup explored the history of the FWS and how it's evolved. Click for more.

Oldest person in the US has died at age 115

POLL: It's been exactly one year since President Biden took office. Do you think he is doing a good job?

Man confesses to 2 unsolved murders in Virginia and Maryland