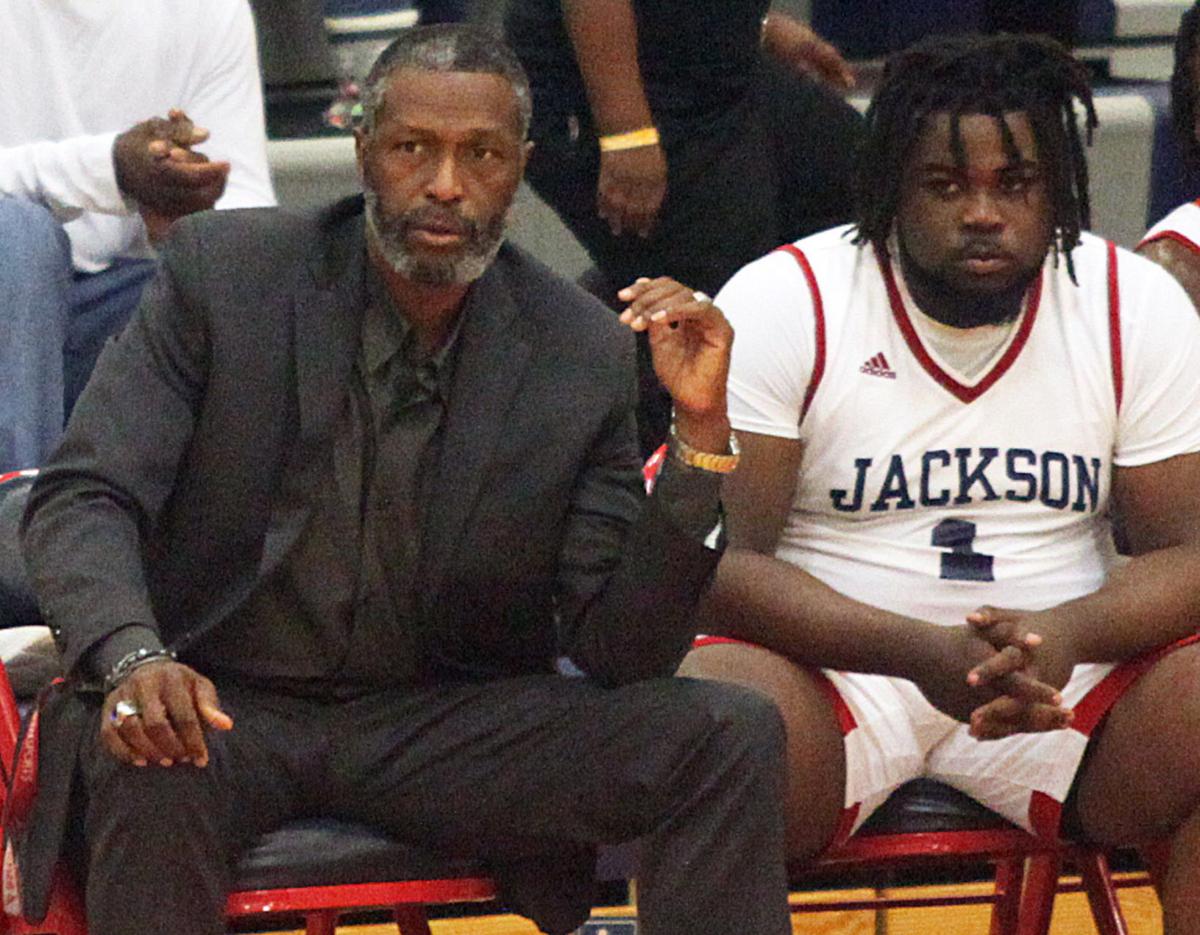 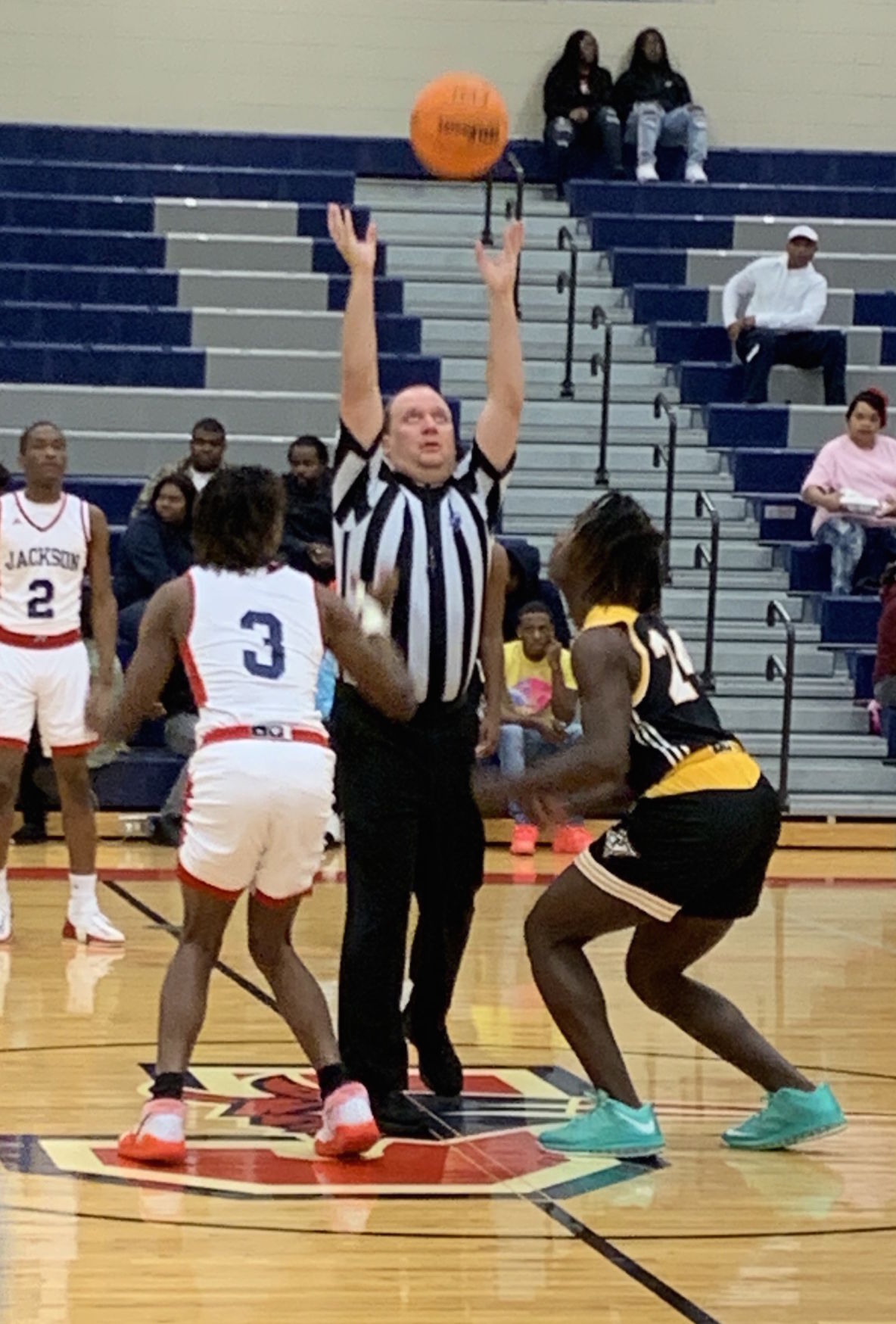 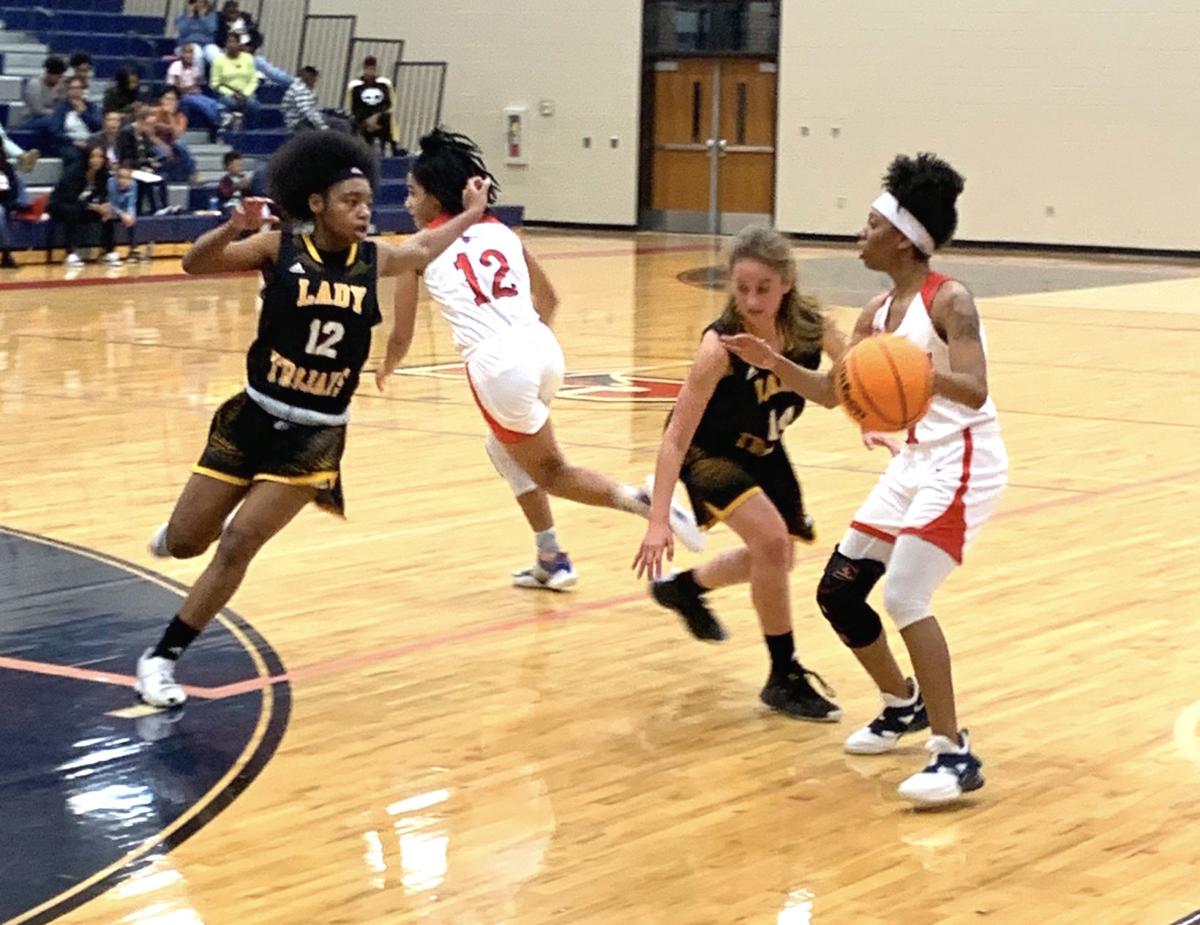 Jackson point guard Kenyata Smith gets ready to be double-teamed by Peach County’s Kaori Cornelius (12) and Kara Miller (14), while Gabbi Cartagena breaks to the basket. 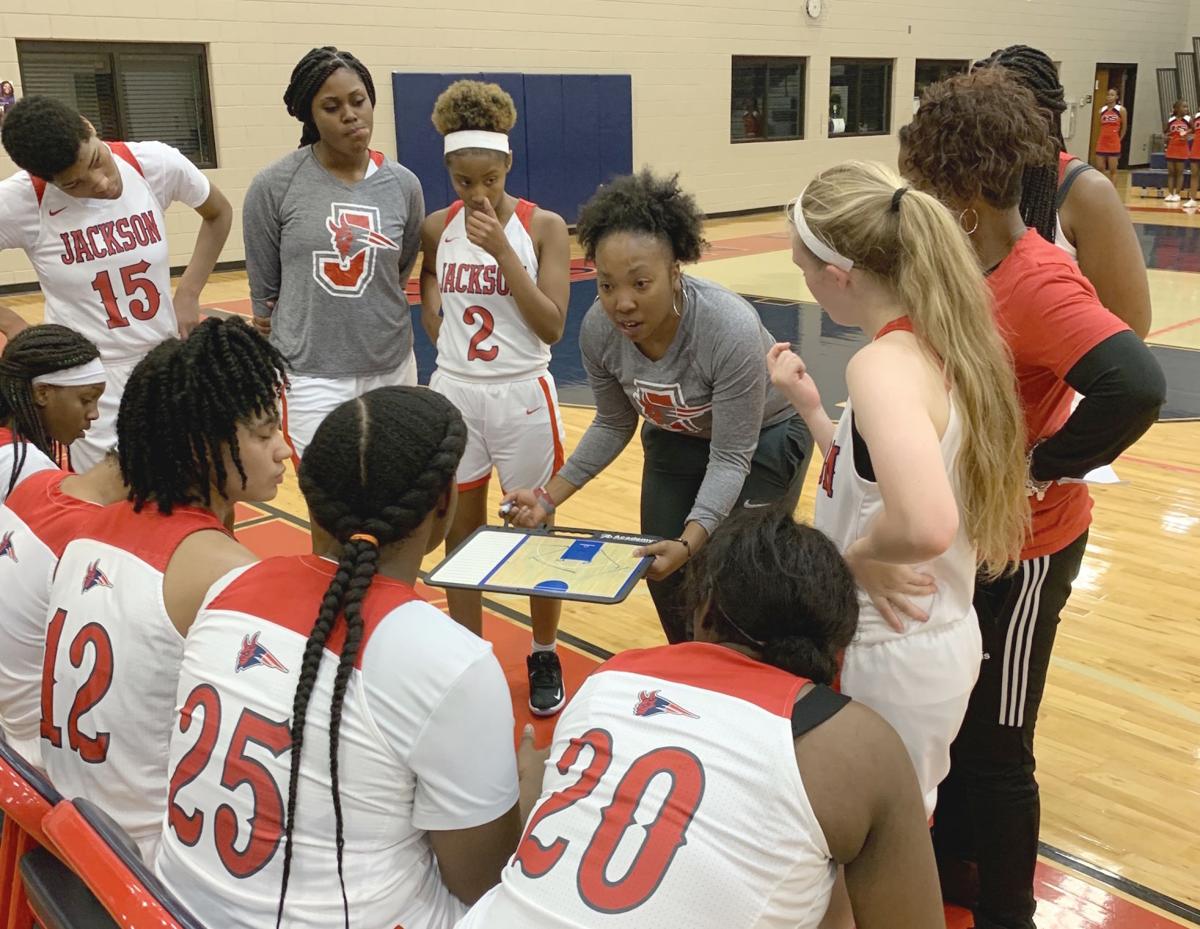 Coach Karisma Boykin takes advantage of a timeout to map out a little strategy against Peach County. The Lady Devils made it look easy in a 56-30 win. 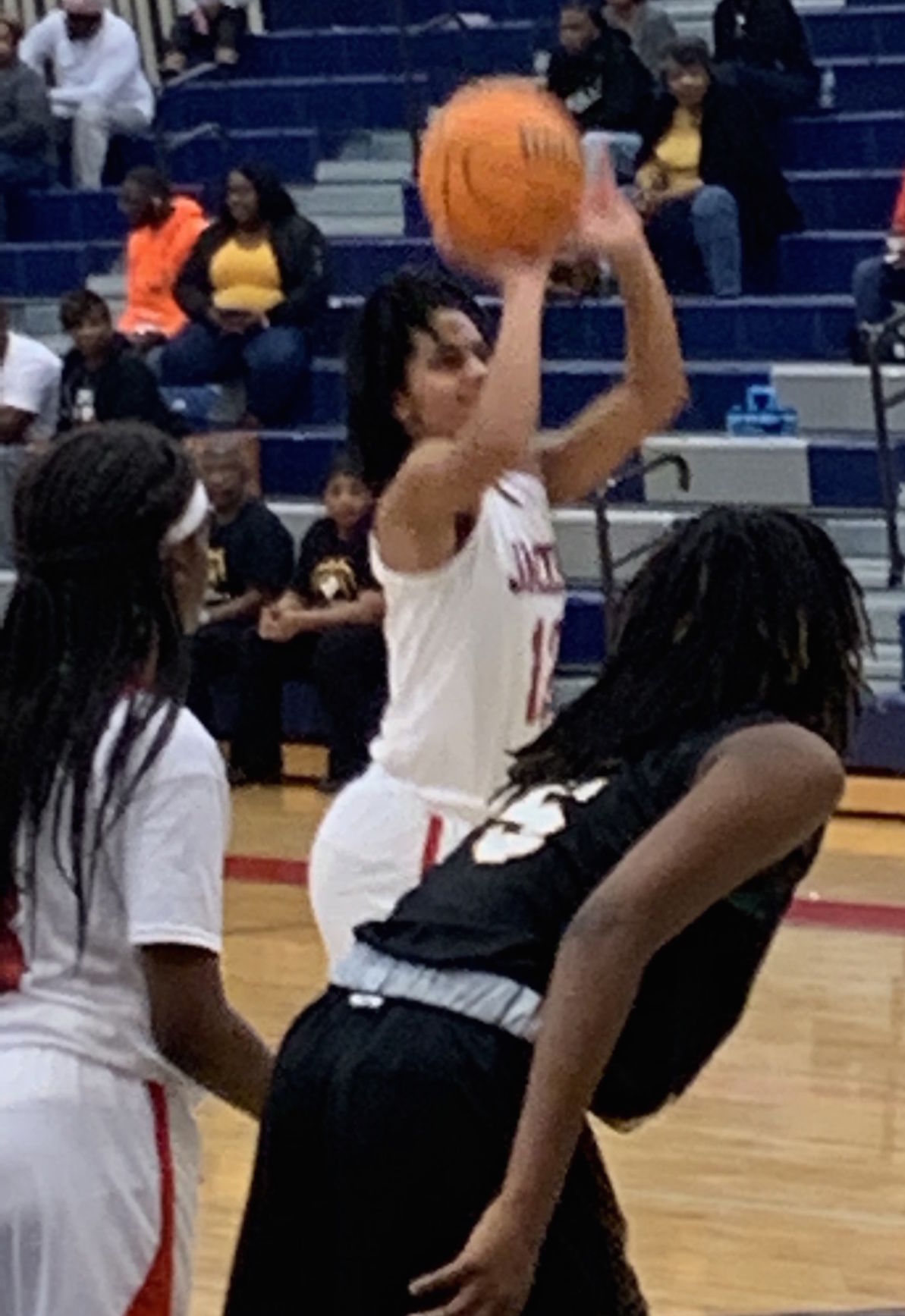 Gabbi Cartagena takes aim from the free-throw line on a night in which she scored a season-high 29 points. 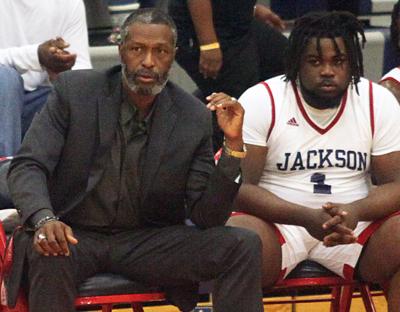 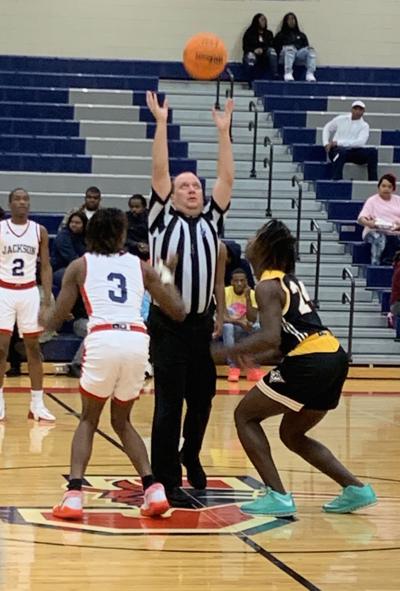 Jackson point guard Kenyata Smith gets ready to be double-teamed by Peach County’s Kaori Cornelius (12) and Kara Miller (14), while Gabbi Cartagena breaks to the basket.

Coach Karisma Boykin takes advantage of a timeout to map out a little strategy against Peach County. The Lady Devils made it look easy in a 56-30 win.

Gabbi Cartagena takes aim from the free-throw line on a night in which she scored a season-high 29 points.

DaShon Hardge is the guy you might overlook on a team filled with guys who get overlooked. At 5-foot-10, 275 pounds, the full-bearded senior looks like he belongs on Dary Myricks’ offensive line with the Jackson football team rather than Virgil Amey’s front court with the Red Devils’ basketball team.

Watch his game carefully, however, and he’ll seldom seem like he’s in the wrong place. More importantly, he finds ways to get the ball to guys in the absolute right place, showing off a velvety smooth passing touch several times Saturday against Peach County. Hardge’s fourth-quarter 3-pointer — the only time scoreboard operator Mr. Billy nudged the shiny numbers on his behalf — made the difference in a 70-67 victory, the Red Devils’ second straight Region 4-AAA win.

It wasn’t a dramatic game-winning shot, since the game didn’t come down to any last-second heroics. Alex Patrick clinched it with two free throws in the final minute, giving Jackson an insurmountable five-point lead. But they couldn’t have won it without Hardge, in more ways than one.

“He is our smoothest, best, all-around offensive guy,” Amey said. “He and Alex have great vision, they see people (open) in the tightest places. He gives us excitement. He brings that free play into organized play and in this new day of oohs and aahs, he has a lot of oohs and aahs in his game… He’s our point forward, small as he is. This summer, he had the nickname Escalade. When we would go over to DeKalb, they’d say, ‘Here comes the Escalade.’ He’s smooth.”

Patrick, often slicing to the basket the same way he found gaps when carrying the football, led the Red Devils with 16 points, including 8 of 10 from the free-throw line. He was followed closely by Jamal Collier with 14 points and Jye Roberts with 12. But Hardge provided a calm presence when the team needed it most in the second half.

Jackson led 36-24 at halftime, but the Trojans roared back to even the score before the Red Devils recovered to carry a three-point lead into the fourth quarter. Amey refused to panic.

“I choose not to be fiery on every possession,” Amey said. “At some point, maturity has to kick in. I called a time out and I told them, ‘You know what to do.’ I didn’t feel like we were not in control because (Peach County) had just as much difficulty trying to score as we did.”

The Red Devils (3-5 overall, but 2-1 in the region) rocked steady in the final period, never surrendering their advantage though the Trojans stayed hard on their heels. In fact, they maintained their small cushion in what — at least for them — has been an unusual manner — they made their free throws. Roberts, Patrick and D’Vonte Evans combined to make 11 of 13 from the line in the fourth period alone after the team missed 10 of 19 in the first three quarters.

The Red Devils also beat Pike County 70-52 Friday as Collier scored 29 points. That win followed a tough 70-50 loss to Rutland, a game in which only Evans reached double figures with 13 points.

The Lady Devils didn’t have to sweat nearly as hard to win their game against Peach County. Inching closer to the 1,000-career point plateau, Gabbi Cartagena nearly outscored Peach by herself. She poured in a season-high 29 points in the 56-30 victory, the Lady Devils’ fifth in eight games. Considering that it took them 25 games last year to win seven, Karisma Boykin’s team is justifying the confidence they seem to exude.

“We’re still working on mental toughness,” Boykin said. “Our energy was a lot better than yesterday. We came out so flat yesterday (in a 41-38 loss to Pike County). This morning, we came in and talked about us. We got in the way of ourselves last night… It was a great bounce-back win. I couldn’t say that last year, when we’d get in a slump, that we’d be able to bounce back the next day. So that shows how their character is growing. If we keep pushing, we’ll be able to do something special.”

Going into this week’s three road games — Tuesday at Central-Macon, Friday at Kendrick and Saturday at Mary Persons — Cartagena was trying to do something special too. She sat 42 points shy of the four-digit milestone after Rutland for 28 in a 69-59 win on Dec. 3, and Pike County for 24 last Friday. If she simply maintains her 25.4-point scoring average, Cartagena would surpass 1,000 at Kendrick.