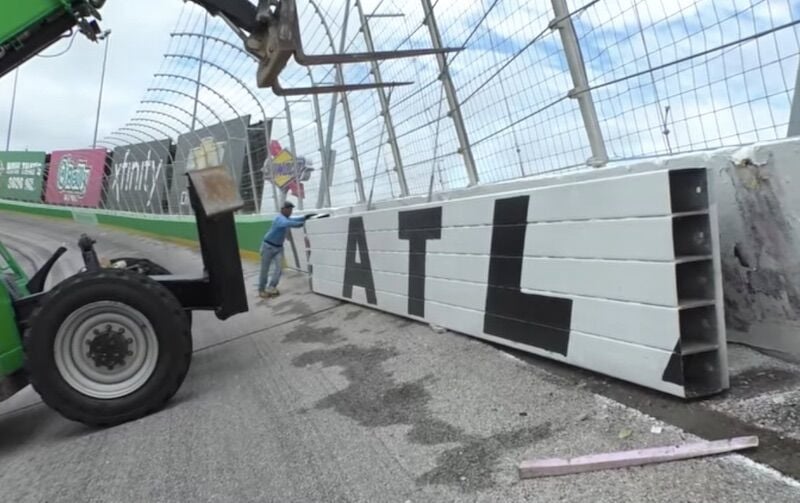 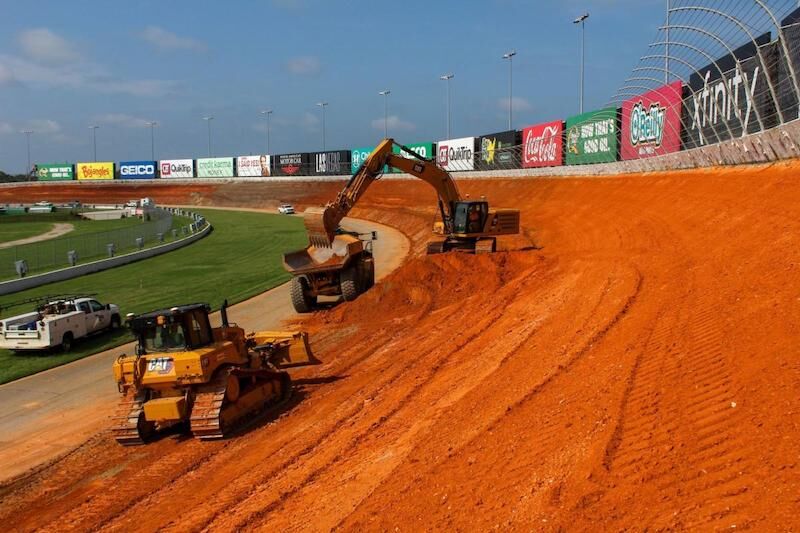 Crews carve into the existing embankment in turns 1 and 2 to give Atlanta Motor Speedway its new 28-degree banked corners. 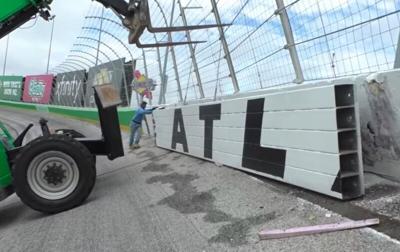 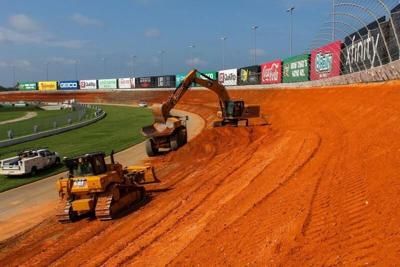 Crews carve into the existing embankment in turns 1 and 2 to give Atlanta Motor Speedway its new 28-degree banked corners.

HAMPTON – Things happen fast at a racetrack, so it’s no surprise that a lot has changed at Atlanta Motor Speedway in just 18 days.

The Quaker State 400 Presented by Walmart on Sunday, July 11, was the final race on the 24-degree banked quad-oval configuration of the speedway. AMS is increasing the current 24-degree banking in Atlanta’s turns to 28-degrees — higher than any other intermediate track on the current NASCAR circuit. Straightaway banking will remain five degrees. In addition to the new high banks, the racing surface will become narrower with an overall decrease in width from 55 feet to 40 feet. New widths will be 52 feet on the front stretch, 42 feet on the back stretch and 40 feet in the turns.

Kurt Busch took the checkered flag on July 11 — his fourth victory on the old layout – and immediately looked to the next generation of AMS with optimism.

Busch wasn’t the only one looking to the future; within minutes of the conclusion of the race, Atlanta Motor Speedway’s operations department began removing the foam inserts in the speedway’s SAFER barriers. Just a few days later, the steel portions of the barriers wrapped around the entire 1.54-mile outer wall had been meticulously removed.

The pace of the project has only accelerated from there. On Monday, July 19, the first chunks of asphalt were removed from turn 1 of the speedway. Since then, all the asphalt in the speedway’s corners has been removed, exposing the vivid Georgia clay that lay beneath.

Crews have now started carving into the embankment in turns 1 and 2 to yield the steeper 28-degree banking that NASCAR’s stars will race on when the series returns for the Folds of Honor QuikTrip 500 weekend in spring 2022. As the all-new Atlanta Motor Speedway begins to take shape, so does the anticipation for inaugural race on the first-of-its-kind speedway.

“Three-wide racing is something that we’ve grown accustomed to at Atlanta Motor Speedway and we certainly don’t want to change that,” said AMS Executive Vice President and General Manager Brandon Hutchison. “What we’re going to have is closer, more competitive racing for our fans to enjoy starting in 2022.”

While a lot of progress has been made in short time on the way to creating that all-new AMS experience, a great deal of work remains.

Grading of the speedway’s corners is currently in progress; in the coming weeks, the old asphalt that has been ripped up from the speedway will be crushed and repurposed as the base layer surrounding a new drainage system. A new top layer of asphalt designed to wear-in quickly will be paved on top.

Tickets to experience NASCAR at the all-new Atlanta Motor Speedway in 2022 are available now at www.AtlantaMotorSpeedway.com.

20 starter houseplants anyone can keep alive

From pretty flowering plants to succulents and unusual-looking cacti, Stacker compiled a list of indoor plants anyone can grow at home without any effort at all. These plants are sure to jazz up corners, staircases, shelves, or even become conversation starters as table centerpieces. Click for more.

It's proving difficult to find a jury in the trial for Ahmaud Arbery's killing. Potential jurors either know the case well, know the defendants or are scared

ARTHUR CYR: Freedom of the press is vital – and fragile

Pop up a celebratory snack